Napoli draws against Torino to all but hand Juventus title 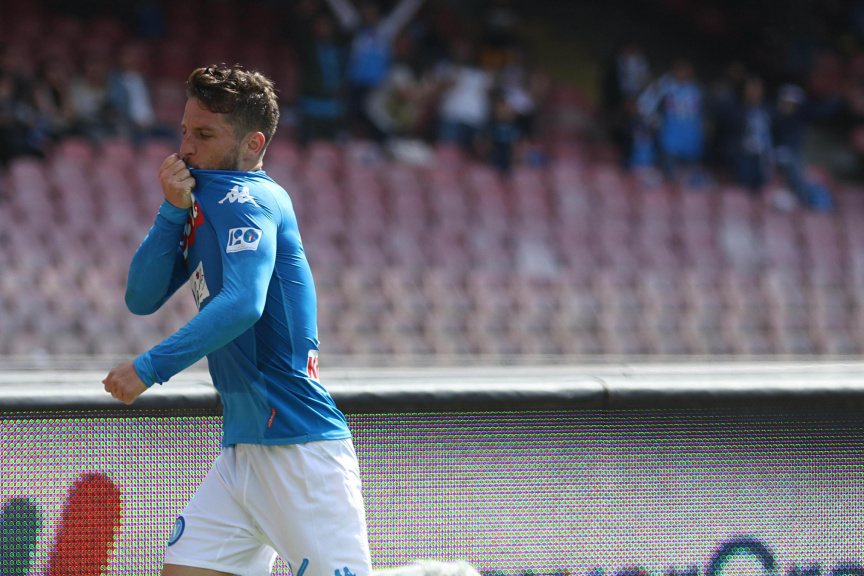 Napoli forward Dries Mertens celebrates after scoring his side's first goal during the Italian Serie A soccer match between Napoli and Torino at the San Paolo stadium in Naples, Italy, May 6, 2018. (Cesare Abbate/ANSA via AP)

MILAN (AP) — Juventus has the champagne on ice after Napoli was held to a 2-2 draw by Torino on Sunday to all but mathematically hand the Bianconeri their seventh straight Serie A title.

Napoli is six points behind Juventus with two matches remaining. The two sides have the same head-to-head record — which is the next deciding factor after points — but Juventus has a significantly better goal difference.

Juventus can mathematically secure the title at Roma next weekend.

"We fought at the top right until the end, the title race was decided by certain episodes," Napoli coach Maurizio Sarri said.

"We did everything possible to make life difficult for Juventus, but they have better resources than us and we really couldn't do anything more than this."

The match in Naples was marked by chants and banners in support of Sarri, who was criticized by club president Aurelio De Laurentiis last week.

"We have always improved in the past three years and I hope that Sarri remains to continue our growth," Napoli captain Marek Hamsik said after the match.

After Juventus beat Bologna on Saturday, Napoli knew it needed a victory to keep the title race alive.

Host Napoli wasted a couple of opportunities before taking the lead in the 25th minute.

It was Dries Mertens' 31st birthday and Nicolas Burdisso gifted him a goal as he failed to control a backpass with two awful touches, allowing the Belgium international to pounce and end his eight-round goal drought.

Torino leveled 10 minutes into the second half when Daniele Baselli's effort was deflected in off Vlad Chiriches.

Substitute Arkadiusz Milik almost restored Napoli's lead in the 70th minute but his powerful effort crashed off the left post.

Shortly after, Hamsik, who had been on the pitch for less than two minutes, fired Napoli in front again by curling into the right side of the net. It was his 100th goal in Serie A.

Milik should have sealed the result but he fired inches wide of the left post from close range and Lorenzo De Silvestri headed in the equalizer seven minutes from time.

The fight for the final two Champions League spots from Serie A is heating up and Roma took a significant step toward reaching next season's tournament with a 1-0 win at Cagliari.

Cengiz Under scored the only goal in the 15th minute and a combination of poor misses from Cagliari and superb saves from Roma goalkeeper Alisson secured all three points for the visitors.

Roma moved third, two points above Lazio, which was held to a 1-1 draw against Atalanta.

Teenage star Musa Barrow gave Atalanta the lead with less than two minutes on the clock but Felipe Caicedo leveled in the 24th, thanks to great work from Luis Alberto.

The top four qualify for Europe's premier club competition and Inter Milan is two points behind Lazio after winning 4-0 at Udinese, which has picked up just two points from its past 14 matches.

Andrea Ranocchia, Rafinha, Mauro Icardi and Borja Valero scored for Inter. Udinese defender Seko Fofana was sent off early in the second half for a dangerous tackle on Ivan Perisic.

Chievo, Crotone and Udinese are all level on 34 points, just one ahead of 18th-place Cagliari.

Sassuolo secured safety with a 1-0 victory over Sampdoria.

Giuseppe Rossi scored his first goal in more than a year but it was not enough to prevent 10-man Genoa from losing 3-2 to his former team Fiorentina.

The American-born Rossi, who has had a series of knee operations, netted in the 64th to cancel out Marco Benassi's first-half opener.

Gianluca Lapadula appeared to have turned the match around four minutes later but Goran Pandev was sent off shortly after for a two-footed tackle on Bruno Gaspar.