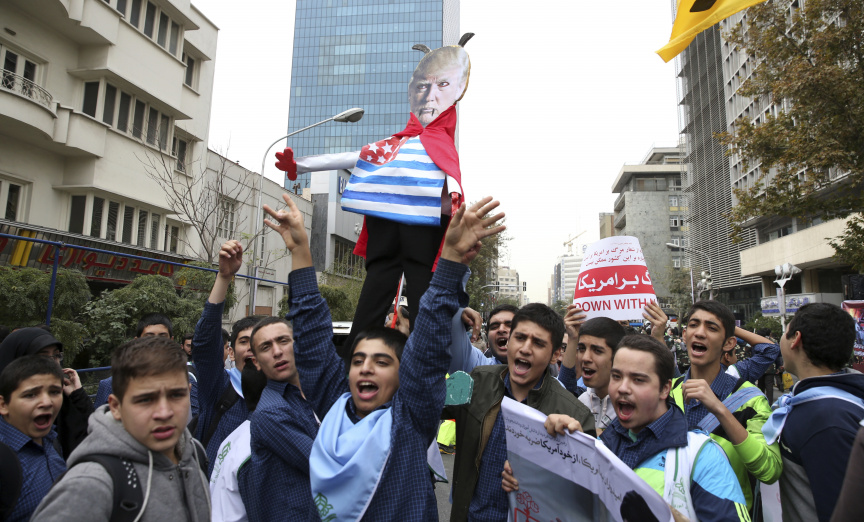 In this Nov. 4, 2017 file photo, Iranian schoolboys chant slogan while holding an effigy of U.S. President Donald Trump in an annual gathering in front of the former U.S. Embassy marking the anniversary of its 1979 takeover in Tehran, Iran. (AP Photo/Vahid Salemi, File)

WASHINGTON (AP) — It's not as simple as just saying "we're out" of the Iran nuclear deal.

If President Donald Trump follows through on his threat to pull the U.S. out of the Iran nuclear deal on May 12, the rest of the world will be thrust into uncharted territory, forced to navigate a complex web of U.S. sanctions that were lifted under the landmark accord but would ostensibly be put back in place.

Would Trump re-impose sanctions on those who do business with Iran? How quickly? And would Europe follow suit? How would Iran respond? And what happens to Iran's pre-existing obligations to allow nuclear inspections?

"It's going to be very complicated," said Ama Adams, who advises clients on international sanctions compliance at the law firm Ropes & Gray. "There are lots of opportunities to trip up and make mistakes. It's going to be a period of a lot of activity and flurry."

A look at possible scenarios for what stays and goes if Trump exits the accord:

Under the 2015 deal, the United States issued waivers to longstanding sanctions punishing Iran for its nuclear program. Iran, in turn, restricted its program and allowed more inspections.

On May 12, he faces a deadline on whether to renew the waivers that eased one basket of sanctions: those on Iran's central bank, intended to hit Iranian oil exports. Another basket of sanctions waivers are up for renewal on July 11, focusing on more than 400 specific Iranian companies, individuals and business sectors.

One of Trump's options, being called "the nuclear option" by some experts, would re-impose all the sanctions at once — even those not scheduled for renewal until July. That would put the U.S. in immediate violation of the deal's terms, which say sanctions remain lifted as long as Iran is complying with its terms. So far, the International Atomic Energy Agency, the U.N.'s nuclear monitoring agency, has said Iran is complying, and Secretary of State Mike Pompeo agrees.

A second option: re-imposing only the central bank sanctions. That would start a 180-day clock in which companies or countries would be expected to reduce their purchases of oil from Iran. Those that don't would ultimately be penalized by Washington.

Why not restore all the sanctions at once? Proponents of doing it piece by piece say it would give the U.S. more leverage to bring about a "fix" to the deal so that Trump could stay in after all. Trump has long said the deal needed to be strengthened or abandoned, but efforts with European allies to strengthen it haven't yet succeeded. With sanctions about to kick in again in 180 days, there might be enough pressure on the Iranians, the Europeans and other members of the deal to give in to Trump's demands, proponents say.

But supporters of the nuclear deal say that's not a viable option because the U.S., by starting the 180-day clock, would have already breached the deal. And as soon as Trump announces sanctions will be coming back, companies will immediately start shutting down their business with Iran. That means Iran would suffer from lost business and could decide to walk away from the deal itself.

Adams, the sanctions attorney, said some companies have already started winding down business in anticipation that Trump may re-impose sanctions.

THE REST OF THE WORLD

What would Europe do? Germany, France and the U.K. have suggested they have no intention of leaving the deal, even if the U.S. withdraws. But it might not matter much. The global financial system is so interconnected and so tied to New York that it would be almost impossible for anyone anywhere in the world to continue their business with Iran without risk of violating U.S. sanctions. For example, Europe businesses owned or controlled by American parent companies would breach the sanctions if they didn't cut off Iran.

It's a major dilemma for European businesses, made even more complicated if the European Union decides to invoke a measure put in place in the 1990s to counter the U.S. embargo on Cuba. The EU can use those regulations to prohibit European companies from complying with some U.S. sanctions. That puts businesses in the position of choosing whether to defy the United States or the EU.

Iran's leaders have been coy, although Foreign Minister Mohammad Javad Zarif told The Associated Press last week Iran would "most likely" abandon the deal if Trump withdraws. Yet the key question is whether Iran would resume nuclear activities, such as enrichment and processing, beyond the limits that were imposed by the deal — and how aggressively.

How would the world even know? If the deal collapses, Iran would no longer be bound by the rigorous inspections regime by the IAEA that it agreed to in the deal. That regime included the so-called Additional Protocol, which expanded the IAEA's access to sites in Iran, including giving inspectors insight into all parts of the nuclear fuel cycle, access on short notice to all buildings at an acknowledged nuclear site, and the right to obtain samples from military sites.

Even without the nuclear deal, Iran would still be required to allow a more limited regime of inspections required by the Nuclear Nonproliferation Treaty, which Iran has signed. But it's unclear how rigorously Iran would comply. After all, alleged cheating and delay tactics by Iran were a major concern prior to the 2015 deal. And Iranian officials haven't explicitly ruled out the possibility that if Trump blows up the nuclear deal, Iran may also leave the Nonproliferation Treaty.

Then there's the question of whether Iran, feeling swindled on a deal the U.S. itself brokered, would take other steps to retaliate — such as ballistic missile tests or more support for militant groups abroad.