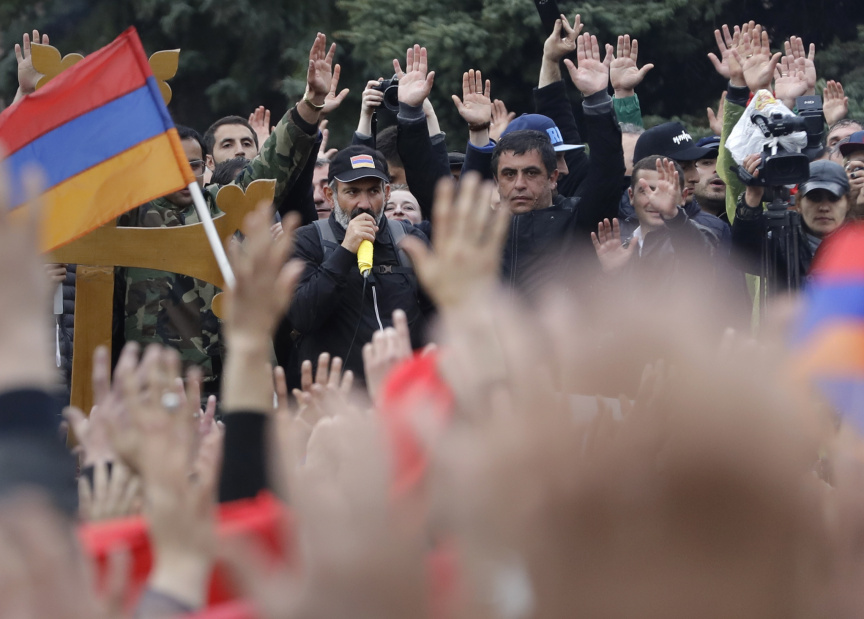 Protesters react while listening to their leader Nikol Pashinian in the town of Vanadzor, Armenia, Saturday, April 28, 2018. (AP Photo/Sergei Grits)

VANADZOR, Armenia (AP) — Armenia's ruling party said Saturday it will not put forward a candidate for prime minister to keep from exacerbating the political crisis sparked by the naming of the country's termed-out president as premier this month.

Armenian lawmakers are scheduled to meet Tuesday to vote on a replacement for Serzh Sargsyan, who resigned Monday amid massive street demonstrations over his selection as prime minister.

But so far, the only candidate put forward is opposition lawmaker Nikola Pashinian, who spearheaded the anti-government protests that prompted Sargsyan to step down.

Sargsyan's Republican party holds a majority in parliament. Party spokesman Eduard Sharmazanov said the decision not to nominate a Republican candidate was made "to avoid confrontation and destabilization of the country."

Republican lawmakers instead plan to consider all other candidates, then vote as a bloc, Sharmazanov said.

Although the party won't nominate a candidate, individual members apparently could enter the race. Former Prime Minister Karen Karapetian, who was appointed as acting premier after Sargsyan stepped down, is a party member.

Pashinian told an evening rally in Vanadzor, Armenia's third-largest city, that having Karapetian remain in the position would be unacceptable.

"Citizens, the people, must explain to Karen Karapetian that he may not be prime minister of Armenia because the country no longer exists where a Republican can be prime premier or president," he said. "This is another Armenia."

Sargsyan was president for 10 years before stepping down this month because of term limits. He was then appointed prime minister, a position whose powers were bolstered under a change in government structure. Opponents viewed the move as effectively allowing him to be leader for life.

"Pashinian gave us hope for the future, that our children won't leave the country but will find their place in a new Armenia," said Alina Mkrtchyan, 37, at the Vanadzor rally.