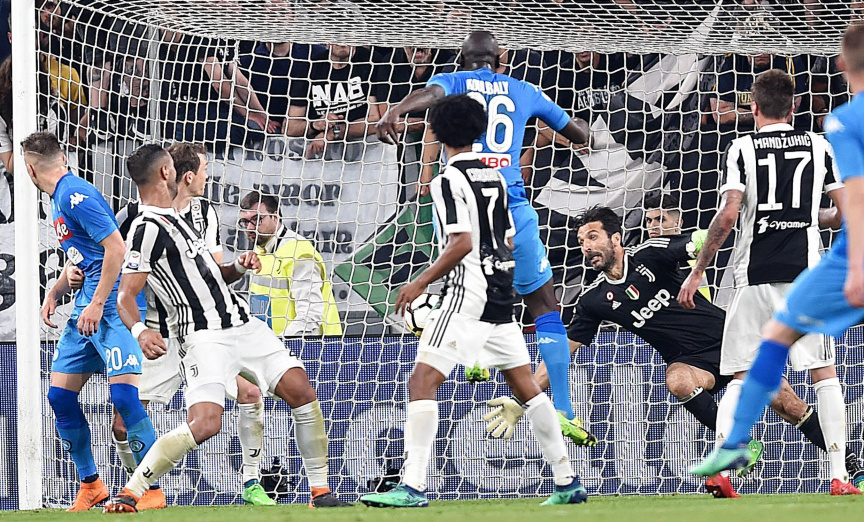 Napoli's Kalidou Koulibaly, top center, scores during a Serie A soccer match between Juventus and Napoli at the Allianz Stadium in Turin, Italy, Sunday, April 22, 2018. (Alessandro Di Marco/ANSA via AP)

"We have always believed in the title, we have to continue like this and believe in ourselves until the end," Koulibaly said.

It was Juve's first league defeat at home since a 2-1 loss to Lazio in October. Its last Serie A defeat in Turin before that was in August 2015.

"Winning here was practically mission impossible, we can be happy because we have played against a great team which hasn't lost at home for so long," Koulibaly said.

Juventus arguably has the tougher run-in as it faces Champions League-chasing Inter and Roma as well as Bologna and Hellas Verona.

"We mustn't make calculations, they're useless," Juventus coach Massimiliano Allegri said. "We just have to put this defeat behind us and prepare for the match in Milan.

"It's true that Napoli is favorite because of the fixture list but matches have to be won. I have seen a lot in football ... anything can happen."

Earlier, Ciro Immobile scored twice as Lazio beat Sampdoria 4-0 to keep pace with Roma and ahead of Inter Milan in the race for Champions League spots.

Lazio remained level on points with third-place Roma and a point ahead of Inter, which struggled but won 2-1 at Chievo Verona. None of the teams can catch either Napoli or Juventus.

Napoli was aiming to boost its dream of a first title since Diego Maradona led the southern club to its only two Serie A championships in 1987 and 1990.

Around 2,000 fans had escorted the team bus to the airport in Naples on Saturday.

"Tonight is a feeling that only those who have been with us since yesterday can fully understand," Sarri said. "It's an enormous satisfaction. We are the only team which represents an entire population, because we are the only one which comes from a big city that only has one team.

"We gave our fans a huge joy today that goes above and beyond the standings."

Juventus was dealt an early blow when key defender Giorgio Chiellini limped off in the 10th minute and was replaced by Stephan Lichtsteiner. Allegri later revealed Chiellini would miss Saturday's match at Inter.

Napoli pressed high but struggled to find a way through the Bianconeri back line and it was Juventus which went closest in the 17th minute as Miralem Pjanic's free kick took a deflection off Jose Callejon to leave Pepe Reina stranded but the ball bounced off the right post.

The Allianz Stadium was briefly silenced shortly before halftime when Lorenzo Insigne had the ball in the back of the net but it was ruled out for offside.

Napoli was camped out in the Juventus half for much of the second period but never really tested Gianluigi Buffon until Koulibaly headed in a corner in the 89th minute.

Immobile boosted his bid for the Serie A top goalscorer award with two late goals as Lazio dominated Sampdoria and could have scored more.

The Italy forward tapped in a ball from Sergej Milinkovic-Savic five minutes from time and doubled his tally moments later after running onto Luis Nani's through ball.

Milinkovic-Savic had headed in Stefan Radu's cross in the 32nd minute and Stefan de Vrij headed in a corner 10 minutes later.

Immobile leads Serie A scoring with 29 goals, three more than Inter forward Mauro Icardi. He won the award in 2014 while playing for Torino.

Inter again had goalkeeper Samir Handanovic to thank as he pulled off a number of saves to maintain the team's Champions League pursuit.

Manuel Pucciarelli also hit the upright as Chievo had several opportunities to take the lead in the first half.

Chievo set up a tense finale when substitute Mariusz Stepinski scored in the final minute and almost snatched an equalizer in stoppages.

Crotone won 2-1 at Udinese to relegate bottom side Benevento, despite its win over AC Milan on Saturday.

Davide Faraoni, who used to play for Udinese, scored a late goal to help Crotone move two points clear of the relegation zone — and level on points with Chievo.

Elsewhere, Cagliari drew 0-0 at home to Bologna and Atalanta beat Torino 2-1 to move above Milan and into the Europa League spots.