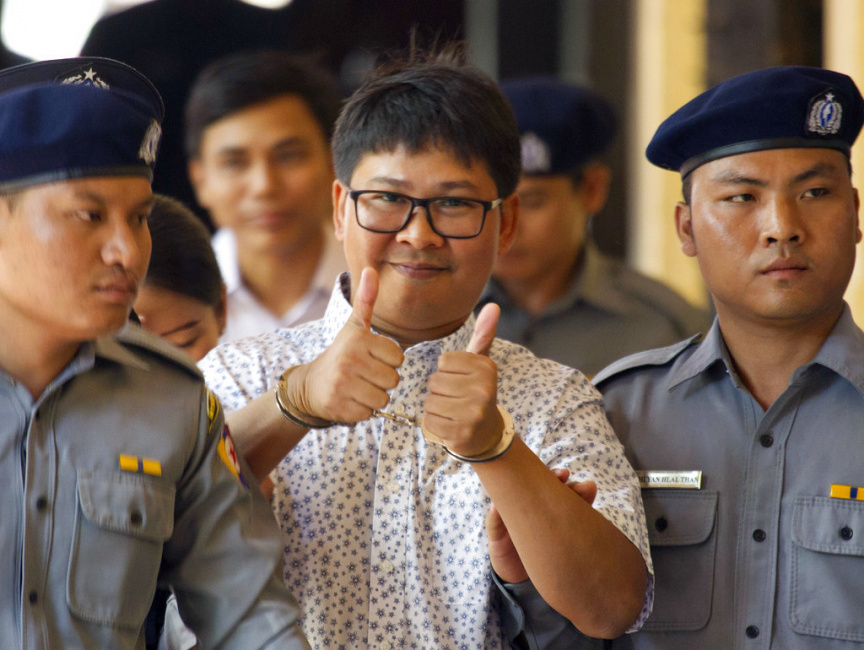 Reuters journalist Wa Lone, center, thumbs up as he is escorted by police upon arrival at the court for trial in Yangon, Myanmar Friday, April 20, 2018. Myanmar court continues hearing on case against two Reuters journalists, arrested under the colonial-era Official Secrets Act, for having restricted documents in their possession. (AP Photo/Thein Zaw)

YANGON, Myanmar (AP) — The prosecution of two Myanmar journalists accused of violating a state secrets law by acquiring official documents given to them by police suffered a major setback Friday when a police officer testified that he and his colleagues were ordered to entrap the reporters.

Wa Lone and Kyaw Soe Oo of the Reuters news agency have been detained since Dec. 12 on charges that could get them up to 14 years in prison. The two had helped cover the crisis in Rakhine state, where a brutal counterinsurgency operation drove about 700,000 Rohingya Muslims to neighboring Bangladesh.

Police Capt. Moe Yan Naing told the court that a senior officer had arranged for two policemen to meet the reporters and hand over documents, previously described as "important secret papers."

He said the officer, Brig. Gen. Tin Ko Ko —his superior in the 8th Security Police Battalion — had overseen interrogations of him and colleagues who had given interviews to Wa Lone about their activities in Rakhine.

Security forces in Rakhine have been accused of serious human rights violations, including extrajudicial killings, against the persecuted ethnic Rohingya Muslims. Last week, Myanmar's military announced it had sentenced seven soldiers to 10 years in prison for their part in killings, a case covered by the two reporters.

According to the captain, Tin Ko Ko ordered one officer who had previously spoken to Wa Lone to make a call and arrange the Dec. 12 meeting, and threatened other police he sent to the meeting that if they did not carry out the arrests, they would be sent to jail themselves.

"The reason why I testified the truth was because police should have their own standard and dignity," Moe Yan Naing told reporters outside the courtroom after testifying as a prosecution witness. "Whatever I testified was the truth."

He was able to speak to the media only briefly before being led away by a plainclothes security official.

The case has drawn international attention, with high-profile rights lawyer Amal Clooney recently joining the legal team representing the jailed journalists. The United States, Britain and Canada, as well as the United Nations, have called for the reporters to be freed.

"We cannot say exactly if the two journalists will be released or not, but police officer Moe Yan Naing has revealed the real case," said defense lawyer Khin Maung Zaw.

Prosecution witnesses who have appeared before the court so far had offered confusing and conflicting testimony, lending weight to the belief that the arrests were a clumsy setup by the government, which is sensitive to any reporting that is critical of its activities in Rakhine.

However, the judge has denied defense motions to drop the case.

"We are very surprised that the truth has been revealed, and we thought since the beginning that this case was set up," said Than Zaw Aung, another lawyer for the reporters. "We did not expect that the police would testify like that. But this testimony will be a very strong support for the defendants."