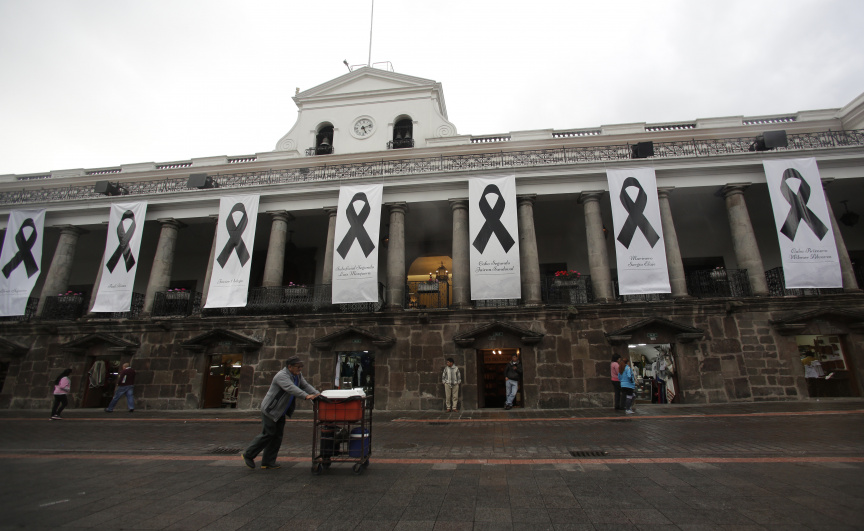 Black ribbon banners representing seven people who were killed by a dissident rebel group on the border of Ecuador with Colombia, hang outside the government palace in Quito, Ecuador, Tuesday, April 17, 2018. (AP Photo/Dolores Ochoa)

Authorities showed a proof-of-life video in which a man and woman tied at their necks with rope beg President Lenin Moreno to meet their captors' demands so that they don't suffer the same fate as the journalists.

"Mr. President, please help us, give us a hand, so the same thing doesn't happen to us as it did the journalists," the man said in the video flanked by two camouflaged men with assault weapons and their backs facing the camera. "We have kids, and family. ... We have nothing to do with this war."

Navas appealed to his compatriots to help identify the two captives, who identify themselves as Ecuadoreans in the video.

He said they were held by the same splinter faction of the demobilized Revolutionary Armed Forces of Colombia, known as the FARC, that the government says killed the employees of El Comercio newspaper three weeks after taking them hostage.

Ecuadorean security forces backed by their Colombian counterparts have been carrying out an unprecedented manhunt for the group's leader, Walter Arizala, better known by his alias Guacho, and have offered more than $230,000 reward for information leading to his capture.

The holdout faction of the FARC has been terrorizing residents along the border area, carrying out several attacks on Ecuadorean military targets in retaliation for Moreno's decision to combat drug gangs that have made the long-neglected area a major transit zone for Colombian-produced cocaine making its way by boat up the Pacific Ocean coastline to Central America and then by land to the U.S. Four soldiers have been killed in the attacks, and dozens more injured.

In a proof-of-life video of the journalists sent by the Oliver Sinisterra Front, the captors demand Ecuador release several of its combatants and end all anti-narcotics cooperation with Colombia. It's not clear if those are the same demands the new captives referred to in the newest video.

"These are cowards," said Navas. "They protect themselves with human shields to blackmail the Ecuadorean people and steal our peace."

The FARC funded its insurgency by taxing cocaine moving through large swathes of the jungle it dominated during its half-century war on the state. But as part of a 2016 peace deal some 7,000 rebel fighter turned over their weapons, vowing to abandon the drug trade and help Colombia's government retrain peasants to grow alternative, legal crops.

A number of criminal gangs, some of them made up of former FARC rebels whose only marketable skill is firing a gun, have rushed to fill the void and profit from a boom in cocaine production.

Among them is Arizala, a former mid-range commander who Colombian authorities say leads a few dozen soldiers.

Even as news of the latest kidnapping sank in, authorities were still struggling to recover the bodies of the three press workers whose murder shocked Ecuadoreans long accustomed to seeing themselves as insulated from drug violence raging across the border.

On Monday, the captors said in a statement that they were halting the handover to the International Committee of the Red Cross because of military actions against them.

"We are not going to allow terror to take root in our homeland," Moreno said Monday.

Red Cross hopes for info on nurse held in Syria