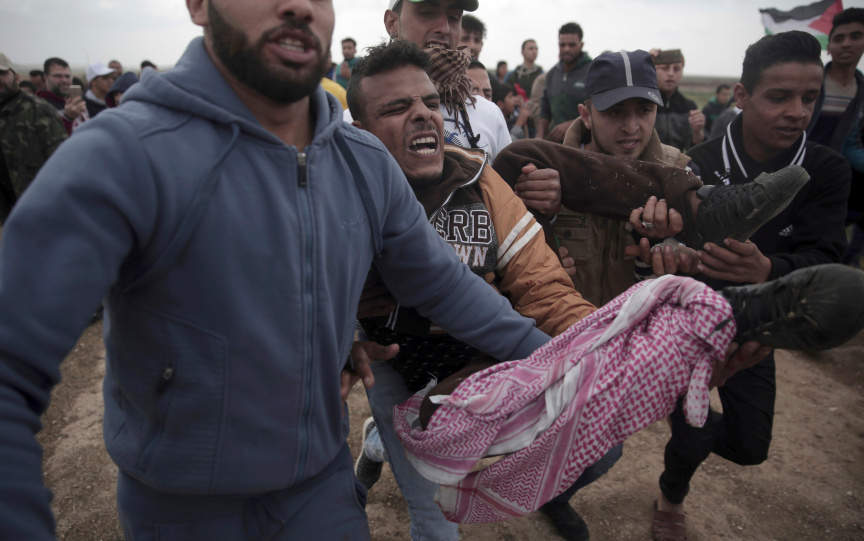 In this Friday, March 30, 2018 file photo, Palestinian protesters carry a wounded man that was shot by Israeli troops during a demonstration at the Gaza's border with Israel. (AP Photo/Khalil Hamra, File)

Lt. Col. Jonathan Conricus, a military spokesman, said the new Hamas tunnel was connected to a network dug in the northern Gaza Strip and entered Israel near the Israeli community of Nahal Oz. It's the fifth such Hamas tunnel Israel has destroyed in as many months.

Conricus said the tunnel was adjacent to the site of recent mass protests, which Israel says Hamas is using as a cover for attacks.

Conricus said Hamas began building the tunnel following the 2014 war. Israel has placed a high priority on halting the tunnel threat since Hamas infiltrated Israel during the war. Although they did not manage to reach civilian areas, the infiltrations caught Israel off guard, with one attack killing five soldiers, and terrified the local population.

In two weeks of protests, 28 Palestinians have been killed and more than 1,500 wounded by Israeli fire. The marches have been organized by Gaza's militant Hamas rulers, but large turnouts on two preceding Fridays were also driven by Gaza's dire living conditions and desperation among the territory's 2 million residents, who have been enduring a crippling border closure by Israel and Egypt since 2007.

"It's a tunnel that cost millions of dollars to dig, money that instead of going to ease the hardship of Gaza's residents has sunk in the sand," he said. "Residents of Gaza: Hamas is burning your money on tunnels to nowhere."

Israel is erecting a subterranean barrier to detect and prevent attack tunnels. Israel says the barrier, as well as new technological innovations, have rendered the Hamas tunnel project futile.

Israel and Hamas have fought three wars since 2008. During the most recent conflict in 2014, Israel destroyed 32 tunnels.