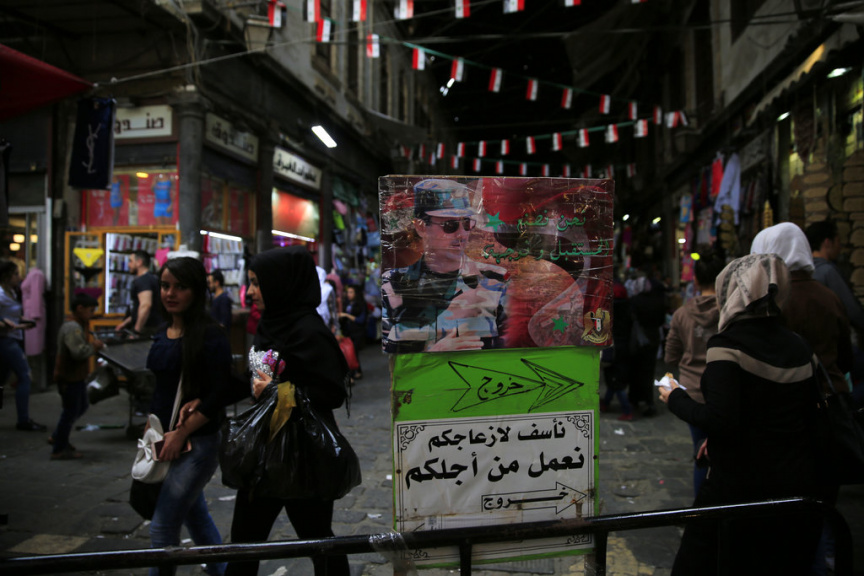 Syrians walk past a picture showing Syrian President Bashar Assad with Arabic that reads, "We apologize for your inconvenience, We are working for you. Exit," as shop at the Hamadiyah market in the Old City of Damascus, Syria, Thursday, April 12, 2018. The streets of Damascus were packed with people Thursday evening either going out to shop in one of the city's main markets to hanging out with families and friends at the capital's cafes, restaurants and sweets shops, people mostly appeared not concerned about a possible U.S. strike on the country going on with their lives as usual. (AP Photo/Hassan Ammar)

MOSCOW (AP) — Russia's foreign minister has asserted that a suspected chemical attack in the Syrian town of Douma last weekend was fabricated with the help of an unspecified foreign intelligence agency.

Sergey Lavrov says Russian experts have inspected the site of the alleged attack in Douma, just east of Damascus, and found no trace of chemical weapons. He says Moscow has "irrefutable information that it was another fabrication."

Lavrov spoke to reporters in Moscow on Friday.

He said that "intelligence agencies of a state that is now striving to spearhead a Russo-phobic campaign were involved in that fabrication." He didn't elaborate or name the state.

The attack has drawn international outrage and prompted the United States and its allies to consider a military strike on Syria, something Moscow has strongly warned against.

5,100 arrested at pro-Navalny protests across Russia