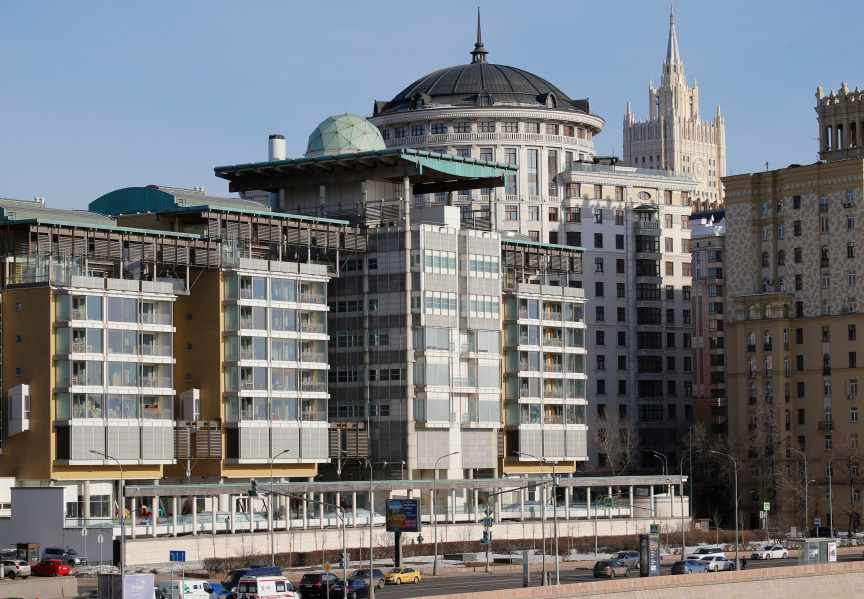 MOSCOW (AP) — The crisis between Russia and the West over the poisoning of a former double agent in Britain heightened Friday as Russia ordered new cuts to the number of British envoys in the country.

Russia also summoned 23 foreign ambassadors to inform them that some of their diplomats would be expelled, a day after ordering 60 U.S. diplomats to leave and demanding that Washington's consulate in St. Petersburg close on short notice.

The massive expulsion of diplomats on both sides has reached a scale unseen even at the height of the Cold War.

Two dozen countries, along with NATO, ordered out more than 150 Russian diplomats this week in a show of solidarity with Britain over the nerve-agent poisoning of Russian ex-spy Sergei Skripal and his daughter in Britain that London blamed on Russia.

Moscow has vehemently denied involvement in the March 4 nerve agent attack in the English city of Salisbury and announced the expulsion of the same number of diplomats from each nation.

The ministry escalated its response Friday, saying it has ordered Britain to reduce the number of its diplomats in Moscow to the level that Russia has in London. The exact number wasn't immediately clear, but state news agency RIA Novosti agency quoted an unidentified Russian diplomat as saying the number of British diplomatic personnel in Russia exceeds the number of Russian envoys in Britain by more than 50 people.

The ministry said it summoned the British ambassador to hand him a protest over the "provocative and unsubstantiated actions by Britain, which instigated the expulsion of Russian diplomats from various nations for no reason." It gave London one month to reduce its diplomatic personnel in Russia.

Adding to the tensions, the ministry late Friday said a plane belonging to Russian state airline Aeroflot was being searched by police in London. Ministry spokeswoman Maria Zakharova said there was no explanation given for the search, which she called "the latest provocation." The plane left London's Heathrow Airport for Moscow about three hours behind schedule.

Commenting on the Russian move to expel more U.K. diplomats, a spokeswoman for the British Foreign Office said "it's regrettable but in light of Russia's previous behavior, we anticipated a response."

"However, this doesn't change the facts of the matter: the attempted assassination of two people on British soil, for which there is no alternative conclusion other than that the Russian state was culpable," she said. "Russia is in flagrant breach of international law and the Chemical Weapons Convention and actions by countries around the world have demonstrated the depth of international concern."

The expulsions affect not only the diplomats but their families as well, forcing them to take their children out of school in the middle of the year.

A hospital treating the Skripals said Thursday that the 33-year-old daughter Yulia was improving rapidly and was now in stable condition but her 66-year-old father remained in critical condition.

He added that Russia has called a meeting of the international chemical weapons watchdog next week to press for an "unbiased and objective investigation."

Russia has accused Britain of failing to back up its accusations with evidence and refusing to share materials from the probe. The Foreign Ministry said it told the British ambassador on Friday that Moscow is ready to cooperate in the investigation.

Earlier this week, the Russian Foreign Ministry alleged that British special services could have been involved in the poisoning and claimed that Britain, the U.S., the Czech Republic and Sweden all have researched the class of nerve agent that London said was used to poison Skripal.

Britain and its allies have rejected the Russian nerve agent claims.

The Foreign Ministry added that it would also consider mirror expulsions of diplomats from Belgium, Hungary, Georgia and Montenegro.

Bulgaria announced it would not expel any Russian diplomats. The country is heavily dependent on Russian gas supplies and tourists.

In response to the U.S. move earlier this week to close the Russian Consulate in Seattle, Moscow also shut the U.S. Consulate in St. Petersburg, giving it until Saturday to vacate the premises.

An Associated Press reporter on Friday saw U.S. consulate staff carrying boxes from the building in St. Petersburg and loading them into a van. Several mini-vans drove out of the consulate while security also detained a man who threw a Starbucks cup at the building.

Some passers-by near the U.S. Consulate cheered the expulsions.

"Let them get out of here," said 61-year-old retiree Viktor Fedin. "You won't put Russia on its knees."

Others were more cautious, worried that the closures would affect visa processing for Russians.

"The Russian government has to respond to the hostile actions against Russia," said 32-year-old researcher Yelena Bogomazova. "But the escalation is bad. The closure of the consulate will make it difficult for people to get U.S. visas. They will have to go to Moscow."

After Russia expelled several dozen U.S. diplomats, the waiting list for U.S. visa applications in Russia has increased to weeks, if not months. The U.S. Embassy said it was unable to process visa applications faster because of the staff shortage.

Russia also warned that the expulsions of its diplomats could slow down issuing visas.

In a statement that reflects the soaring tensions, Moscow also accused Washington of trying to recruit the Russian diplomats it has expelled as spies.

The Russian Foreign Ministry said the U.S. special services have engaged in "frantic efforts" to make cooperation offers to the expelled Russian diplomats. The ministry described the alleged U.S. overtures as "cynical and disgusting," adding that they have failed.