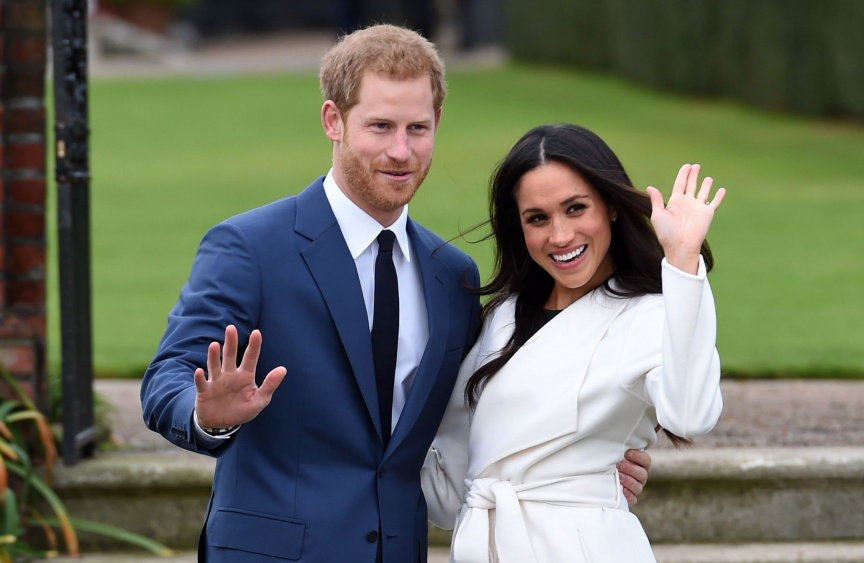 In this Nov. 27, 2017 file photo, Britain's Prince Harry, left, and Meghan Markle pose for the media at Kensington Palace in London. (Eddie Mulholland/Pool via AP)

NEW YORK (AP) — In pajamas and old wedding gowns, with high tea or a bit of the early morning bubbly, royal watchers in the U.S. and around the globe are fascinator-ready to watch the nuptials of Prince Harry and his unprecedented fiancee: Meghan Markle.

He's the spare to the heir, soon to be booted to sixth in line for the throne, but Harry is forever the people's prince to many inside and outside the Commonwealth who once wondered whether the bad boy of Windsor would ever tie the knot.

She, of TV "Suits" fame, has whipped up some big fan buzz, including those thrilled by her mixed race heritage.

Their "woke" wedding (the Spice Girls are expected) is May 19 at midday, Windsor Castle time, or about 7 a.m. in the Eastern U.S. Viewing party plans are in the works, as are pricey hotel packages and bar meet ups. The frenzied have their own Facebook groups and some have cajoled less-enthused spouses to jet across the pond to watch the pomp in person from a spot on the carriage route.

Julie Brillhart, a hardcore royal enthusiast in Hurricane, West Virginia (population, 7,000, maybe), said she fired up her Harry and Meghan Facebook group to connect fans with parties back in November, "the minute I woke up in the morning and found out Meghan and Harry were engaged." The group now has nearly 5,000 members.

"We are in love with Meghan Markle," said Brillhart, a former career logistics specialist in the Army. "For every little black girl who has ever wanted her very own princess who is a well-known, modern princess, they now have one. Isn't that wonderful? She will always be our American princess."

The group's members share wedding updates and plans for gatherings, and they live in 91 countries on six of the seven continents.

"We're actively looking for contacts in Antarctica," Brillhart said. "They had their own Women's March so we thought wouldn't it be great for them to have their own little get-together for the wedding. They need something to break the monotony."

In Indianapolis, legal assistant Kelly Bentley, is on board. She's married to a Brit. From North Yorkshire, to be exact. She'll be the one in a crown as they sit at the bar of the Aristocrat Pub & Restaurant, sipping something yummy as the wedding unfolds.

"He doesn't get as excited as I do," she said. "It's really fun that she's from the United States. It's that added connection. I got up early for William and Kate and the Charles and Diana wedding."

Melissa Uhte, the Aristocrat's general manager, said the place usually opens for breakfast at 8 a.m. but she'll hang the welcome sign an hour early for the wedding. On the bar side, for those 21 and older, reservations were filling up for a royal brunch. On the restaurant side, kids are welcome. Royal attire is encouraged. Uhte's 5-year-old daughter will be Elsa from "Frozen."

"I'm going to try to squeeze into my wedding dress. I might have to wear a sweater to cover the back of it. It's been nearly 15 years," Uhte laughed. "There's no shame. We've asked the moms to break out their wedding dresses, too."

Royal media commentator Eloise Parker in New York said much of the U.S. hype is due to Markle's status not only as an American but a divorced one.

She's "kind of all of us and we could use a good news story right now," she said. As for Harry, Parker said, he likely will never be king but, "people have a soft spot for him as the royal bad boy."

For 31-year-old Esha Dev, who is Indian-American, the fact that Markle is a fellow woman of color offers an added connection.

"There's definitely that, seeing that representation join the royal family," she said.

Dev plans to host a viewing party, complete with mimosas, English tea and pastries, for a small group of friends in her tiny one-bedroom apartment in Philadelphia. It will be come as you are, fascinators provided.

"I didn't even exist when Princess Diana got married," she said. "The William and Kate wedding didn't seem like such a big deal to me but this one has really stirred me up."

For the well-heeled, hotels are also gearing up. The Brazilian Court Hotel in Palm Beach, Florida, has on offer the "Royal Romance Suits You" package for a cool $24,000 with a four-night stay in its "Brando Suite."

Upon arrival, guests will receive a bottle of Tignanello and banana cake — Markle's favorite wine and the flavor chosen for their wedding cake, the hotel said. They also get the Strathberry tote bag that sold out after Markle was pictured carrying it and an introductory helicopter lesson to honor Harry's service in that department.

A yachting excursion, a bespoke necklace modeled after Meghan's engagement ring, afternoon tea, traditional English breakfast in bed and dinner at Cafe Boulud are included, with 5 percent of proceeds going to some of the couple's favorite charities, along with a local humane society.

Kristin Contino in Philadelphia will be marking the occasion in Windsor. She's flying over for the wedding, husband in tow.

"I grew up loving the royal family," she said. "My mom was a big fan of Princess Diana. My sister's name is Diana, if that gives you an indication. I missed going over for William and Kate's wedding so my husband said if Harry ever gets married we'll go. He honestly thought Harry would never get married."

Gossip columnist Rob Shuter, a Brit, royal wedding podcaster and former executive editor of OK! Magazine, called the wedding excitement a slow burn in the U.S., though cheeky Harry has always held a special place in the hearts of many.

"I think this wedding is going to be a way for all of us to escape," he said. "Who doesn't need that right now?"