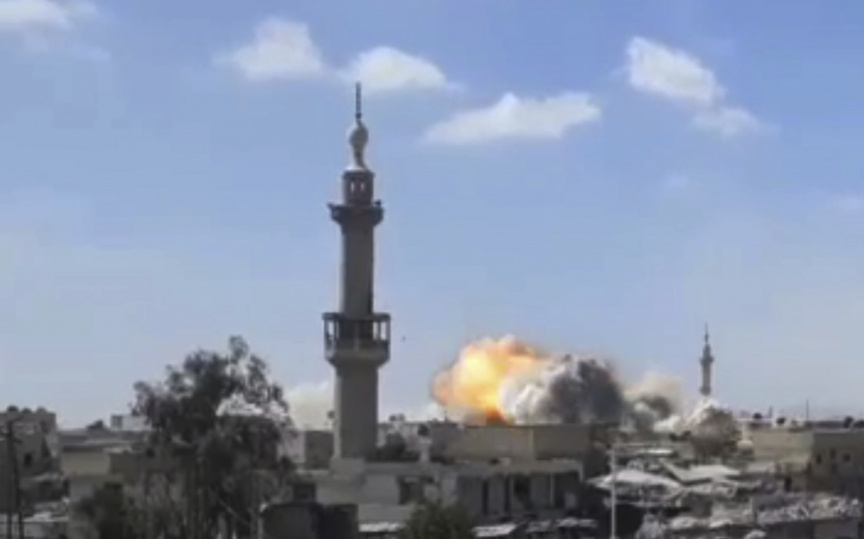 BEIRUT (AP) — Syrian government forces succeeded Saturday in their deepest push yet into the eastern suburbs of the capital Damascus, cutting off a major highway that made it hard to move between three parts of the rebel-held area, and inflicting a major blow to opposition fighters who have vowed not to surrender.

Syrian state media and an opposition monitoring group said government forces have laid siege on the rebel-held town of Harasta, cutting it off from the rest of the suburbs known as eastern Ghouta.

Britain-based Syrian Observatory for Human Rights said government forces have also cut off the main highway that links northern Ghouta with its southern parts, isolating the town of Douma, the largest in the area.

The government-controlled Syrian Central Military Media said troops captured the Kilani gas station on the main highway linking Douma with Harasta and those two areas with the rest of eastern Ghouta. Residents will have to rely on unpaved roads to move in eastern Ghouta but that is difficult because of the intensity of shelling and airstrikes, activists said.

"The regime has cut Ghouta into three parts by cutting the main roads linking them," said the Observatory's chief Rami Abdurrahman.

The government and its Russian backers, determined to wrest eastern Ghouta from rebel control after seven years of war, recently intensified the shelling and bombardment to clear the way for its troops to advance on the ground. Nearly 1,000 people have been killed in the past three weeks of relentless bombardment.

SCMM said troops on Saturday reached the center of the town of Misraba, adding that opposition fighters are crumbling amid the offensive. Syrian state TV aired live footage from inside the town and saying that troops are less than a kilometer (0.6 miles) from troops on the western side. Reaching them would physically cut northern parts of eastern Ghouta from its southern parts.

"The Syrian Arab Army soldiers marching from three sides could meet soon," said Rabih Dibi, a reporter with state-run Ikhbariyah TV in his report from Misraba.

TV footage later showed dozens of men, women and children crowded in an underground basement in Misraba after troops captured the area. The TV station said authorities will move the nearly 60 people to a safe location where they will be given shelter and food.

"Once you came in we felt well," said one of the women in the basement. Another man said there were 15 families in the basement who have been hiding for days.

Ikhbariyah reported that government forces and their allies captured farms outside the village of Aftris and are now marching toward the village. It added that troops are also moving toward the town of Jisreen on the southern edge of eastern Ghouta.

The Observatory reported that troops are advancing under the cover of attacks by warplanes and helicopter gunships and confirmed that government forces captured large parts of Misraba.

"The bombing is so intense. Warplanes haven't left the skies for 24 hours," opposition activist Anas al-Dimashqi told The Associated Press via text messages from the rebel-held town of Kfar Batna. "The advance is the result of a scorched earth policy."

Mekdad added that insurgents groups in the eastern Ghouta are preparing "to fabricate" more such attacks to blame the Syrian army.

Maj.-Gen. Vladimir Zolotukhin, of the Russian center for reconciliation of the warring parties in Syria, said Saturday negotiations were being conducted about the withdrawal of rebel fighters from Syria's besieged East Ghouta. He said rebel artillery fire from East Ghouta hit residential areas of the capital Damascus and its suburbs, killing at least one person.

"Tense negotiations continue between representatives of the Center ... leaders of the illegal armed formations of the Syrian opposition in order to reach an agreement on the withdrawal of the second line of militants from the zone of de-escalation of East Ghouta," he said, according to Russian news agencies.

On Friday, the second largest rebel group Failaq al-Rahman lost its second-in-command Diaa Shaghoury, who was killed in fighting against government forces, the group said.

The Observatory said three weeks of fighting have left 976 people dead, including nearly 200 children. The group said the dead also include 146 soldiers and pro-government gunmen.