The Latest: UK to reveal substance behind ex-spy's illness 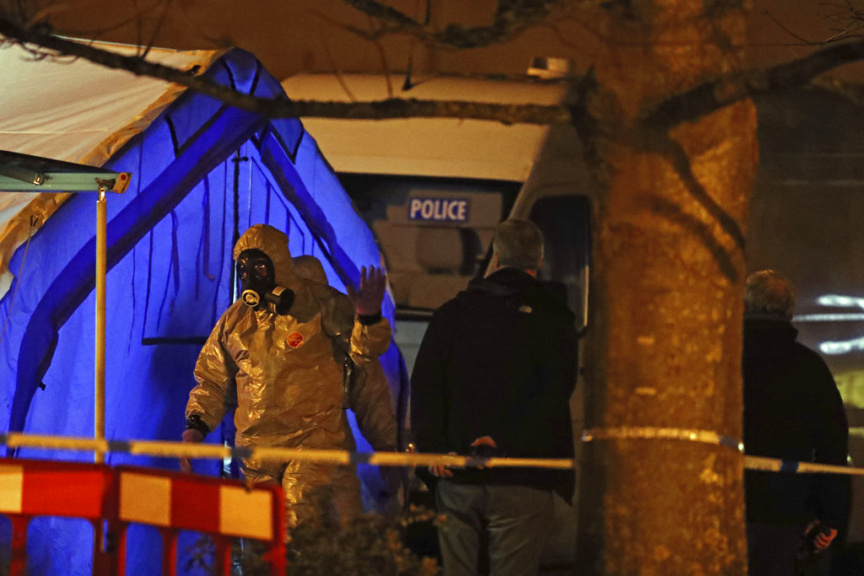 Investigators next to a police tent outside The Mill public house at the Maltings in Salisbury, England, Tuesday, March 6, 2018, near to where former Russian double agent Sergei Skripal was found critically ill. Britain's counterterrorism police took over an investigation Tuesday into the mysterious collapse of a former spy and his daughter, now fighting for their lives. The government pledged a "robust" response if suspicions of Russian state involvement are proven. Sergei Skripal and his daughter are in a critical condition after collapsing in the English city of Salisbury on Sunday. (Steve Parsons/PA via AP)

Britain's Home Secretary says authorities will soon reveal what kind of substance led to the mysterious collapse of a former Russian spy and his daughter, who were found slumped on a public bench in southern England.

Amber Rudd chaired a meeting Wednesday of the government's emergency committee amid speculation about who is behind the suspected poisoning of Sergei Skripal, 66, and his 33-year-old daughter Yulia. The two were found collapsed in the town of Salisbury Sunday and remain in critical condition.

Rudd said it is important to respond not to rumor but to evidence.

She said: "We do know more about the substance and the police will be making a further statement this afternoon in order to share some of that."

Counterterrorism police are investigating the case.

British counter-terror police have cordoned off a new scene in the case of the former Russian spy and his daughter who collapsed near a shopping mall in southern England.

Amesbury is about nine miles from Salisbury, where Sergei Skripal and his daughter Yulia were found collapsed on a bench Sunday.

British counterterrorism specialists have taken control of the case from local police trying to unravel the mystery of what happened to the pair. The matter has not been declared a terrorist incident.

Police are also asking members of the public to come forward if they had visited a Salisbury pizza restaurant or pub where the couple were last seen on Sunday.

Russia's Foreign Ministry says the unexplained illness of a former Russian spy in England is being used to fuel an anti-Russian campaign and further strain bilateral ties.

Sergei Skripal and his daughter are in critical condition after collapsing on a public bench in the English city of Salisbury on Sunday.

Russian Foreign Ministry spokeswoman Maria Zakharova said Wednesday that "what happened to Skripal has been immediately used to further incite anti-Russian campaign in Western media." She added that the allegations were intended to "further exacerbate relations between our countries."

U.K. Foreign Secretary Boris Johnson said on Tuesday that Britain may not participate "in the normal way" in this summer's soccer World Cup in Russia if Moscow is proven to be behind the sudden illness of the former spy.

Britain's Home Secretary will chair a meeting of the government's emergency committee during which ministers will be briefed on the mysterious collapse of a former spy and his daughter.

The Cobra committee meets Wednesday as counterterrorism police investigate the suspected poisoning of Sergei Skripal and his daughter, Yulia, who collapsed Sunday on a public bench in southern England after they came into contact with an unknown substance.

While police say they are keeping an open mind, the case has reminded Britain of the 2006 poisoning of former spy Alexander Litvinenko, which was blamed on the Russian state.

Foreign Secretary Boris Johnson told lawmakers Tuesday that Britain would act — and possibly limit its participation in the upcoming soccer World Cup in Russia — if Moscow is shown to have been involved.

Mexico, Canada,others may be exempted from US tariffs