Chanel caps Paris with ode to fall; stars out at Vuitton 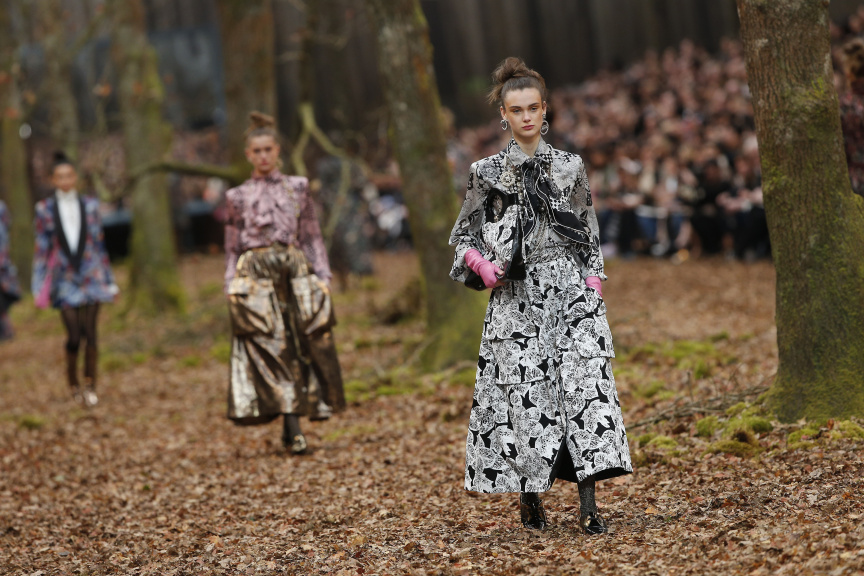 Designer Karl Lagerfeld crowned the fall-winter shows on its final day with his oak and poplar forest — a welcome breath of fresh air for fatigued fashionistas as they reached the finish line after viewing over 70 collections during the week.

Some highlights of the day, including shows from Louis Vuitton and Miu Miu:

An autumnal palette in the clothes mirrored the oak leaves and green moss that covered the floor at the Grand Palais salon.

Fuzzy leaf motifs — such as beech, oak, sycamore — were used decoratively on oval or A-line coats that glimmered with metallic thread. Wide coppery pants had a sheen that evoked morning dew.

History is never far from Chanel, the storied maison founded in 1910. The fashions of that era were softly referenced in a series of fully covered gowns in rich fabric with high Edwardian collars, fastidious embellishments and myriad jewelry.

A fur cape in brown and gray with an imposing triangular silhouette looked Russian and imperial.

The dead leaves scattered around the ground didn't dampen the humor and zest for life of 74-year-old Chaplin, who has played Coco Chanel in film and has an affectionate bond with the house.

The actress daughter of silent movie star Charlie Chaplin will next be seen on the silver screen playing a "very nice English nanny" who meets a sticky end in 2018's "Jurassic World."

"I get eaten by the biggest, strongest dinosaur," she said while smiling and relishing every word.

"I get thrown into the air and smashed to smithereens, and killed in a horrible way," she added. "It was an amazing experience, obviously."

France's broadcasting regulator is clamping down on sexism, issuing a new charter that bans advertising that projects sexist or degrading stereotypes of women, which includes fashion advertising.

At Paris Fashion Week, some expressed concern that rules over how women should be represented could threaten artistic freedoms.

The measures could "start infringing on a lot of the expression that pushes in the right way," said Amy Verner, Paris-based freelance fashion writer.

"It's interesting that they're clamping down on it. But what are the barriers? Don't kill beauty and don't kill sex," said Chaplin. "I hope men don't get too scared to flirt," she added.

"French representations of womanhood are actually very strong and self-determined, and I think there are a lot of houses that were built by women in France and we're at one right now," he said at the Chanel show.

"There is a (sexist) pressure. I think you do get masculine impositions but I don't think they often come from high fashion. They come from other industries like motor racing or football," he said.

ELLE FANNING AND THE EARLY 90s AT MIU MIU

It wasn't the only surprise at designer Miuccia Prada's little sister brand, which was color-rich and replete with unexpected, imaginative twists.

The early '90s was the decade in vogue this season, and a wide shoulder was the key silhouette.

Bleached denim jeans and a coat with a round shape gave way to a golden brown trench with a bright yellow handbag and drainpipe check pants. Colors were used discordantly.

The beehive hair on many of the models also perfectly captured the "alternative" styles of that decade — particularly in Britain with the optimistic joy of Brit Pop.

Humor was everywhere: A buff colored jacket with exaggerated shoulders shimmered like plastic — and was created to appear intentionally synthetic, despite its obvious high price.

Meanwhile, the decor celebrated the universe of the tongue-in-cheek label.

Giant black and white signs were hung from the rafters of the show venue. Each sign comprised a letter or an image such as a female body or a face that sometimes evoked the female portraits by Henri Matisse.

The house said it was to express the quirky identity of the mix-and-match house.

Louis Vuitton this season opened up one of the most secret courtyards of the Louvre to guests who included actor Jaden Smith and actresses Sophie Turner. Emma Stone, Michelle Williams, Jennifer Connelly and Sienna Miller.

The former royal palace is one of the world's biggest, yet still has vast areas little-known to the public. Louis Vuitton — France's most lucrative fashion brand — boasts unrivalled access to Paris' most sacrosanct sites.

Yet despite the buildup, Vuitton's collection made scant reference to the special venues.

Decoration or emphasis on the upper chest was a big theme in the disparate decorative styles that revamped ethnic, sportswear and military styles in a contemporary way.

There were statement collars in contrasting colors, gowns with truncated lattice capes around the bust and tops with chest stripes. A freedom defined many of the upper silhouettes.

A sharply cut tuxedo was worn loosely around the shoulder, sleeves limp. And a knee-length silk dress in horizontal sections fluttered by unstructured in the evening breeze.

The lack of referencing to the historic venue was a missed creative opportunity.

But Ghesquiere may have wanted the beautifully executed clothes to make their own dramatic statement.

Givenchy gets gritty as Poiret is relaunched in Paris