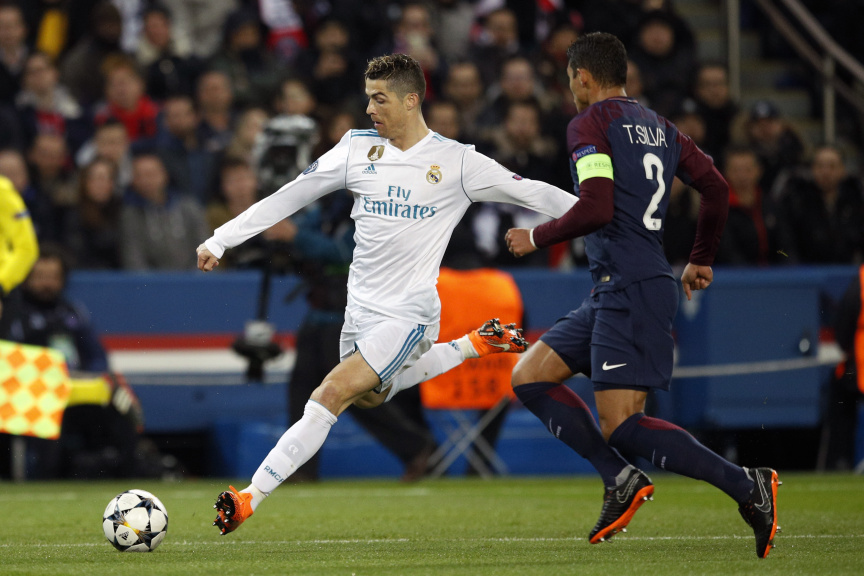 Real Madrid's Cristiano Ronaldo, left, makes an attempt to shot the ball as PSG's Thiago Silva tries to stop him during the round of 16, 2nd leg Champions League soccer match between Paris Saint-Germain and Real Madrid at the Parc des Princes Stadium in Paris, Tuesday, March 6, 2018. (AP Photo/Francois Mori)

PARIS (AP) — Paris Saint-Germain's dream of joining Europe's elite with a Champions League trophy will have to wait another season, as Real Madrid delivered a brutal reality check by cruising through to the quarterfinals with a 2-1 win on Tuesday night.

Cristiano Ronaldo's powerful header — his 12th goal of the competition — and a deflected effort from midfielder Casemiro either side of a close-range finish from PSG's Edinson Cavani sent Madrid through 5-2 on aggregate.

Peaking at the right time, Madrid can be confident of challenging for a third straight title and 13th overall.

PSG still has not reached the semifinals since its lone appearance in 1995. PSG's ambitious club motto of "Dream Bigger" should perhaps now be revised. On this evidence, and last season's humiliation at the hands of Barcelona, PSG remains a club more hopeful than convincing. Despite huge investment from cash-rich Qatari owners QSI since 2011, PSG has not been past the quarterfinals in that time.

"We needed our heads and our hearts today. But we didn't have both, we didn't play as well as Real Madrid," dejected PSG coach Unai Emery said. "Madrid deserved to go through. I think they controlled 60 percent of the game and we didn't do enough with the 40 percent we had. Losing to Real Madrid itself isn't a disappointment, but being knocked out in the last 16 is."

Trailing 3-1 from the first leg, PSG's fragile defense crumbled and its attack offered little threat without the injured Neymar. The biggest bang from this PSG side was from the fireworks constantly let off by a section of fans behind one goal.

Cavani's goal gave PSG some hope with 20 minutes left. But with midfielder Marco Verratti already sent off, scoring two more to force extra time was beyond a lackluster PSG side.

Instead, midfielder Casemiro's deflected shot looped past stranded goalkeeper Alphonse Areola in the 80th. He was gifted the ball after midfielder Adrien Rabiot dealt poorly with Lucas Vazquez's cross.

To compound a miserable night for PSG fans, who so badly want to believe this side can conquer Europe, Verratti showed terrible composure to in getting sent off midway through the second half. He got a second yellow card, having protested vehemently with referee Felix Brych after not getting a free kick.

"Our fans got behind us, I apologize to them," Rabiot said. "We tried but we couldn't do it."

The Champions League's all-time leading scorer was given far too much space and leapt triumphantly to beat Areola with a downward header in the 51st minute. He had netted twice in the first leg.

Ronaldo is hitting top form at a crucial time and has scored in nine Champions League games in a row, matching Ruud van Nistelrooy's record.

This was a huge test for a PSG side desperate to prove it belongs among Europe's elite, especially after spectacularly failing last year — becoming the first team eliminated after winning the first leg 4-0. Barcelona won the return 6-1.

"Maybe tonight they weren't so good, but it's also because we played very well," Real Madrid coach Zinedine Zidane said. "Obviously it became harder for them when we scored the second goal."

In the night's other match, five-time champion Liverpool eased into the last eight, drawing 0-0 at home to two-time winner Porto after winning the away leg 5-0.

The atmosphere was electric at Parc des Princes in Paris, with thick smoke engulfing the stadium a pre-match pyrotechnics were set off. PSG's exuberant fans were asked to "stop letting off flares" over the stadium loud speaker just after the interval.

This was all part of a concerted effort to motivate the players. The club's communications department had released a video, urging fans to rally behind the team seemingly as a matter of urgency for the city itself. Neymar also posted a video on Twitter, with the words "Vous allez le Faire" (You will do it).

Banners around the ground encouraged the team and some fans had already taken matters into their own hands. Late into the night before the game, a small group of PSG Ultras let off bangers, chanted "Paris" and banged a drum outside the Real Madrid team hotel.

After a fairly even first half, Ronaldo headed wide early in the second half — a warning sign.

Moments later he headed home Vazquez's pinpoint cross from the left after a quick break down the left from the impressive Marco Asensio, astutely selected ahead of Gareth Bale by Zidane.

"Tactically we played the right way, we believe in what we're doing," Zidane said. "We closed them down high up the pitch."

Madrid could have had further goals breaking forward on counterattacks, with Asensio and Ronaldo hitting the post.