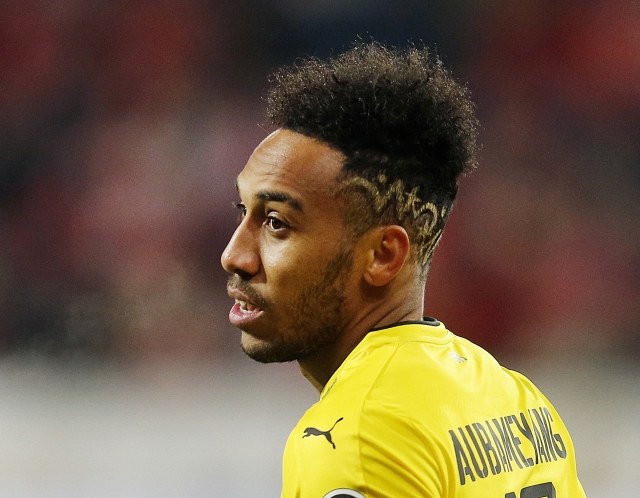 Arsenal paid a club-record fee of 63.75 million euros ($80 million) to sign Pierre-Emerick Aubameyang from Borussia Dortmund on Wednesday, completing the overhaul of the team's attack that was triggered by Alexis Sanchez's departure to Manchester United.

In the most significant move in the Premier League on the final day of the January transfer window, Aubameyang joined Arsenal as Olivier Giroud left the Emirates Stadium for Chelsea. Completing a triangle of transfers, Michy Batshuayi exited Chelsea to join Borussia Dortmund on loan for the rest of the season.

The 28-year-old Aubameyang will compete with, or maybe complement, offseason signing Alexandre Lacazette up front as Arsenal looks to make up an eight-point deficit to the Champions League qualification positions in the Premier League.

Another new face in Arsenal's attack is Henrikh Mkhitaryan, the playmaker who arrived from Manchester United last week as part of the swap deal that took Sanchez to Old Trafford. Mkhitaryan and Aubameyang linked up to great effect when they played together at Dortmund in the 2015-16 season, scoring 62 goals between them in all competitions.

This is the first transfer window since Sven Mislintat joined Arsenal as its head of recruitment after 10 years at Dortmund. Among the players Mislintat was credited with identifying and developing at the German club are Mkhitaryan and Aubameyang, and he has managed to reunite them.

Aubameyang scored 98 goals in 144 games for Dortmund in the German league after joining from Saint-Etienne in 2013 and was the top scorer last season with 31. Only eight players from Europe's top five leagues have scored more goals than the Gabon striker since the start of 2014-15 season.

Arsenal inadvertently posted a video on its website in the early hours of Wednesday, during which manager Arsene Wenger confirmed the signing of Aubameyang in an in-house interview after the Premier League game against Swansea on Tuesday. The video was quickly taken down.

Arsenal lost to Swansea 3-1 in a game that exposed its weakness up front without the explosive Sanchez around. It left Wenger's team in sixth place with 13 matches left.

The fee for Aubameyang was identical to that paid by Manchester City for France under-21 international Aymeric Laporte on Tuesday.

The 25-year-old attacking midfielder was Tottenham's only signing of the January transfer window and joined for a fee of 25 million pounds ($35 million) on a contract that runs until 2023.

Moura, who has made 35 appearances for Brazil, almost moved to the Premier League in 2012, but PSG beat Manchester United to his signature. His 40 million euro transfer fee from Sao Paolo was a record at the time for a player in the Brazilian league.

After an inconsistent five years in the French capital, Moura was dropped by coach Unai Emery this season, playing just 76 minutes of Ligue 1 football for the runaway French leaders. Overall, he scored 46 goals and provided the same number of assists in 228 games.

Atlético gets Griezmann back, Real left without Mbappe

Gerd Müller, ‘the best striker in history,’ dies at 75

Kooddoo-Villingili bridge to be pushed for via campaign