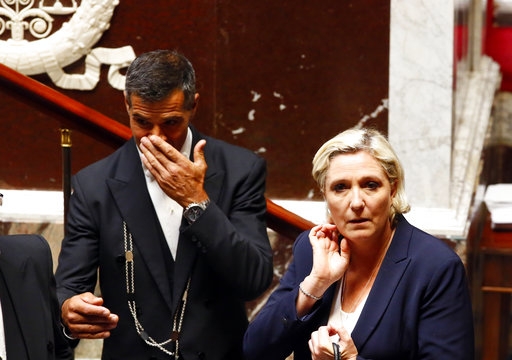 PARIS (AP) — French far-right leader Marine Le Pen was charged Friday with allegedly misusing European Parliament funds to pay two parliamentary aides who also work at her National Front headquarters. Her lawyer said she denies the charges and will fight to get the investigation suspended.

Investigators suspect some National Front lawmakers used legislative aides for the party's political activities while they were on the European Parliament payroll. Le Pen is president of the far-right National Front party.

The prosecutor's office said Le Pen was summoned and handed preliminary charges of breach of trust and complicity in breach of trust concerning two parliamentary aides when she served at the European Parliament.

Le Pen is suspected of using parliamentary funds to pay Catherine Griset from 2009 to 2016 and bodyguard Thierry Legier from 2014 to 2016 for allegedly working as aides in Strasbourg, seat of the European Parliament, even though they also have roles in her far-right National Front party. Griset was charged in February for allegedly receiving money through a breach of trust.

Le Pen is also charged with complicity in breach of trust in connection with her role as president of the National Front from 2014-2016. That charge could not immediately be clarified.

"It makes no sense," National Front vice president Florian Philippot, Le Pen's top lieutenant, said on the BFM-TV station. "She is obviously 24 hours out of 24 both the president of the National Front and a European deputy."

Le Pen plans to file an urgent demand Monday at the Appeals Court asking that the preliminary charges be annulled due to "the violation of the principle of separation of powers," her lawyer, Rodolphe Bosselut, said in a statement. She will also seek a suspension of the investigation.

His reference to "separation of powers" may relate to a contention that the French justice system should not interfere in the affairs of political parties. Bosselut could not immediately be reached for comment.

The preliminary charges are thrown out if investigators fail to come up with convincing evidence. The case goes to trial if they do. A conviction for breach of trust charge carries a potential penalty of up to three years in prison and a fine of 375,000 euros ($428,000).

Le Pen had twice refused summonses from authorities while campaigning, first for the French presidential election which she lost May 7 to Emmanuel Macron, then for a lawmaker's seat in the French National Assembly which she won on June 18. Due to that win, Le Pen gave up her seat in the European Parliament.

Some leading politicians are now living under a cloud of suspicion as to whether they misused funds meant to pay aides' salaries.

The one-time front-runner in France's presidential race this year, conservative Francois Fillon, was charged over allegations that he paid his wife, who served as his parliamentary aide, and two children for work they did not perform. Fillon suffered a big loss in the first round of the presidential vote.

Macron himself is determined to avoid any possible connection to the lax or corrupt political practices of the past. Three of his ministers bowed out of their jobs shortly after being appointed — the justice, defense and European affairs ministers — over concerns they could be caught in the investigations into the political use of salaries to parliamentary aides.

Mexico: 19 killed in clashes near beach city of Mazatlan