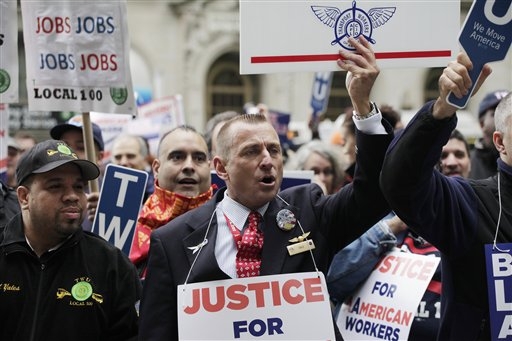 NEW YORK (AP) — Lawyers for American Airlines and its labor unions argued Monday in federal bankruptcy court over the best course for the financially troubled company.

American's lawyers said the company must make painful cuts in labor costs to survive in an increasingly competitive industry. Union lawyers suggested that there is a gentler alternative — a merger with US Airways.

American's parent, AMR Corp., has lost about $12 billion since 2001 and filed for bankruptcy protection in November. The company says it is saddled with higher labor costs than competitors and must eliminate 13,000 union jobs, freeze or terminate pension plans, curb health benefits, and change work rules.

Without union approval, American can only make those cuts — saving $1.25 billion a year — if the bankruptcy court lets it throw out the union contracts. Otherwise, American says, it can't survive.

"A restructured job is better than no job at all," said Jack Gallagher, a lawyer for American, America's third-biggest airline.

Once-great carriers such as Pan Am and TWA are gone. "We don't want to join them," he told Judge Sean H. Lane, who will decide whether American can throw out the union contracts.

"There are alternatives out there that don't require these draconian cuts," he said.

The union lawyer was referring to last week's bombshell — American's unions endorsed a potential takeover bid by US Airways Group Inc., the fifth-largest U.S. carrier, which has failed in previous merger attempts with United and Delta. Union officials approved tentative contracts that would kick in if US Airways can take control, with terms including pay raises and fewer job losses.

US Airways CEO Doug Parker says he would keep both airlines' hubs and planes, stick with the American Airlines name, and create a bigger company that could compete against United and Delta. But AMR CEO Thomas Horton says he's not interested in a merger until his company finishes cutting costs in bankruptcy.

American has exclusive rights to present a restructuring plan to the court until Sept. 28. The unions and other creditors could ask the court to cut that period short if there is a legitimate alternate proposal.

Horton told American Airlines employees in a letter Monday that the US Airways announcement changed nothing. He said US Airways has its own long-standing problems, and that only American and its creditors can determine the company's future.

While it would be natural to look for "an easy way out" — a dismissive reference to letting US Airways take over — "there is no easy path back to renewal and growth and industry leadership," Horton said.

Horton has said American can bounce back on its own, with new revenue from international flying, a planned expansion at five big U.S. hubs, and orders for 460 new planes that will be more fuel-efficient and comfortable.

But to carry out that turnaround, American says, it needs relief from union work rules that limit its flexibility and drive up costs. The most important are restrictions in the pilots' contract that limit American's use of certain planes and prevent it from outsourcing flying to other U.S. airlines, which Horton wants to do. Another rule allows crews to fix seats while a plane is outside but not while it's in the hangar.

Before the hearing, union members rallied outside the courthouse a few blocks from Wall Street. They carried signs saying "Merge don't purge" and chanted "We got sold out."

The fight inside the courtroom is about more than just American. If the company gets its way, it will cement a decade-long upheaval that has seen most other large U.S. airlines use the bankruptcy process to cut wages, shed pension obligations, and eliminate cumbersome union work rules.

American is expected to take the entire week to make its case. That will be followed by a two-week break for the company and unions to try to negotiate agreements outside court. The Transport Workers Union will start voting on American's final offer next week, a spokesman said. If any of the three unions haven't settled by May 14, they will present their case, and the judge is expected to issue a decision in early June.

AMR lost more than $10 billion in the decade leading up to its bankruptcy filing, and the losses keep piling up — another $1.7 billion in the first three months of 2012, most of it for restructuring expenses. Other major U.S. airlines, however, have returned to profitability by raising fares, imposing more fees on passengers, and by cutting labor costs.

"We're going through a major restructuring of labor relations in the airline industry," said Gary Chaison, a professor of industrial relations at Clark University in Massachusetts.

The unions, which forced American to capitulate on wages in the 1990s, have lost much of their clout. Even if they agree to concessions now, Chaison said, they'll probably be asked to give up more in a few years as the airlines keep cutting costs.