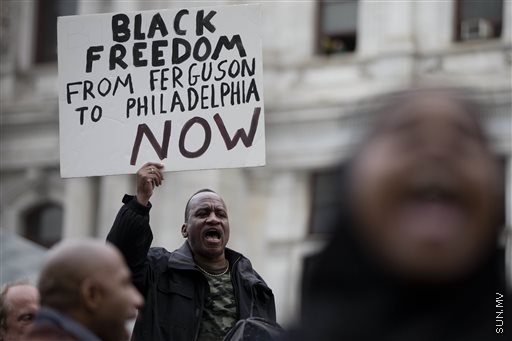 FERGUSON, Missouri (AP) — Missouri's governor ordered hundreds more state militia into a St. Louis suburb Tuesday after a night of violent protests over a grand jury decision's not to indict a white police officer in the killing of an unarmed black 18-year-old, a case that has inflamed racial tensions in the U.S.

Attorneys for the family of the slain young man, Michael Brown, criticized the grand jury's decision as rigged but appealed for peace. Officer Darren Wilson, in his first public comments, defended his actions.

The decision announced Thursday night means Wilson faces no state criminal charges in the Aug. 9 shooting, which reignited debates over relations between police and minority communities, even in cities far from Ferguson, the St. Louis suburb where Brown was killed.

In the aftermath of Monday's violence, Missouri governor Jay Nixon more than tripled the number of National Guard soldiers sent to Ferguson, ordering the initial force of 700 to be increased to 2,200 in hopes that their presence would help local law enforcement keep order.

About 50 protesters converged on a barricade guarded by 30 Guard members. The group chanted "Whose streets, our streets," ''This is what democracy looks like" and "Hands up don't shoot." Two protesters wearing masks were arrested after refusing to comply with police instructions to get out of the street.

Outside police headquarters in Ferguson, one woman was taken into custody after protesters threw what appeared to be smoke bombs, flares and frozen water bottles at a line of officers. Two other protesters wearing masks were arrested after defying police instructions to get out of the street.

Other demonstrations were held across the U.S. for a second day. Hundreds of Seattle high school students walked out of classes, and several hundred people marched down a Cleveland freeway ramp to block rush-hour traffic.

Wilson, in an interview with ABC News, said he has a clean conscience because "I know I did my job right." Wilson has been on leave since the shooting and had remained out of the public eye.

The officer said in his jury testimony that feared for his life during his confrontation with Brown, which he blamed on the big teenager, saying the theft suspect reached through his driver's side window, hit him in the face, called him a "pussy" and tried grabbing his gun. Wilson then got off a shot that went through Brown's hand, the only bullet that hit Brown at close range.

Wilson told ABC he felt like it was his duty to chase Brown after the confrontation at his police vehicle. When asked about witness accounts that Brown at one point turned toward Wilson and put his hands up, he responded "that would be incorrect." Brown fell to the ground about 153 feet (46 meters) from Wilson's vehicle, fatally wounded by the last of the seven bullets that struck his body.

Public attention to the killing has frequently focused on the fact that Brown was unarmed. But whether or not Brown had a weapon makes little difference under Missouri law, which says police can act with deadly force when they believe it is necessary to arrest a person who may "endanger life or inflict serious physical injury."

Several protests broke out for a second day in the St. Louis area and other cities around the U.S. About 300 people marched from a park to the St. Louis courthouse, chanting "You didn't indict. We shall fight." Police used pepper spray and arrested several demonstrators who blocked major intersections in St. Louis.

The protests that followed the grand jury decision quickly became chaotic, with protesters looting and setting fire to businesses and vehicles, including at least two police cars. Officers eventually lobbed tear gas from inside armored vehicles to disperse crowds.

President Barack Obama deplored the destructive acts, saying they are criminal and those responsible should be prosecuted. But America's first black president said he understands that many people are upset by the grand jury decision.

"The frustrations that we've seen are not about a particular incident. They have deep roots in many communities of color who have a sense that our laws are not always being enforced uniformly or fairly," Obama said.

White House officials are still considering whether Obama should travel to Ferguson, weighing the importance of the moment with the risk of inflaming tensions.

There were 61 arrests in Ferguson overnight and 21 in St. Louis. At least 18 people were injured, including someone who was shot and was recovering at a hospital.

In Ferguson, 12 commercial buildings were burned down and other businesses were looted during overnight protests, authorities said.

Attorneys for Brown's family stressed that those setting fires and engaging in violence were not on Brown's side.

But they said the grand jury process was rigged from the start to clear the white officer. They criticized everything from the types of evidence St. Louis County Prosecutor Bob McCulloch presented to the jury to the way it was presented and the timing of the grand jury's decision. Attorney Anthony Gray suggested McCulloch presented some testimony, including from witnesses who did not see the shooting, to discredit the process.

Attorneys for Brown's family said they hope an ongoing federal civil rights investigation leads to charges. But federal investigations of police misconduct face a steep legal standard, requiring proof that an officer willfully violated a victim's civil rights. That is a high bar especially considering the wide latitude given to police officers in using deadly force.

The Justice Department has also launched a broad probe into the Ferguson Police Department, looking for patterns of discrimination.

Regardless of the outcome of the federal investigations, Brown's family also could file a wrongful-death civil lawsuit against Wilson.