At. Nacional, Union Espanola through in Copa 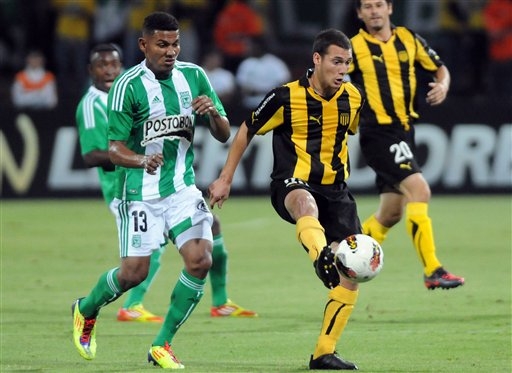 MEDELLIN, Colombia (AP) — Colombia's Atletico Nacional and Union Espanola of Chile both progressed to the knockout phases of the Copa Libertadores with a game to spare by winning their matches on Tuesday.

In Tuesday's other results, Ecuador's Deportivo Quito defeated Defensor Sporting 2-0 to leapfrog the Uruguayan side and move into second place in the Group 7, while Argentine side Arsenal kept its hopes of qualification alive with its 1-0 victory over last-placed Zamora of Venezuela in Group 4.

In Medellin, Atletico Nacional's Dorlan Pabon struck a freekick from 35 meters into the top corner of the net one minute before halftime for his sixth goal in five games, and doubled his team's lead.

Atletico, which has the most goals of any team in the competition with 15, had taken the lead early in the 7th minute when Oscar Murillo slid in to convert from close range.

Diego Alvarez added the host's third in the 60th.

In Santiago de Chile, Union Espanola pressed early and opened the scoring in the 18th against Bolivar through a Braulio Leal header from a corner.

Argentine Emanuel Herrera tapped in the second in the 67th, after a headed from compatriot Sebastian Jaime left the goalkeeper out of position.

Paraguayan Ever Cantero got one back in the 83rd for Bolivar when he broke the offside trap and headed in from close range. The Bolivian side had an appeal for a penalty in the dying seconds but it was waved away by the Brazilian referee.

With one game remaining, Bolivar needs at least a draw next Tuesday in La Paz against Chile's Universidad Catolica to advance, with Colombia's Junior out of the competition in last place in the group.

In Group 7 in Quito, Deportivo's Luis Checa scored with a glancing header from a high left wing cross in the 37th for the home team, with Maximiliano Bevacqua beating keeper Yonatan Irrazaba for the second in the 65th.

Federico Pintos had been sent off for Defensor after a hard, high tackle in the 55th.

The result means all four of the group*s teams, including Guadalajara of Mexico and Argentina's Velez Sarsfield, have possibilities of progressing into the round of 16, with Chivas and Velez playing their penultimate game on Wednesday.

In Group 4 in Venezuela, Juan Pablo Caffa scored a penalty in the 30th minute to give Arsenal the three points. Fellow Argentine side Boca Juniors need one win from its last two games to guarantee qualification and eliminate Arsenal.

Boca faces Fluminense in Rio de Janeiro on Wednesday in their fifth game. The Brazilian side is the only team left in the competition with a perfect record.

Neymar to undergo surgery in Brazil