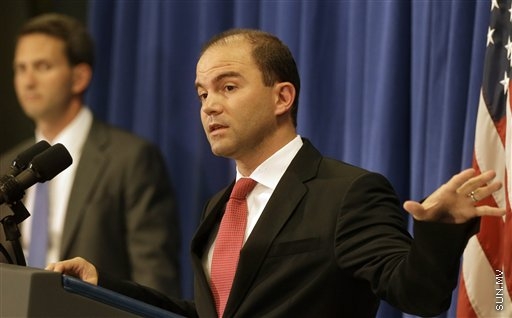 WASHINGTON (AP) — The Obama administration on Friday denounced the movement of a Russian convoy into Ukraine, citing it as the latest provocation by Moscow along the highly volatile eastern border of the former Soviet republic.

"We very much condemn the violation — flagrant violation — of Ukraine's sovereignty that we saw today with the movement of this Russian convoy into Ukraine," said Ben Rhodes, deputy national security adviser to President Barack Obama.

Rhodes also said the United States has detected the use of Russian artillery in Ukraine in recent days.

According to the White House, Obama and German Chancellor Angela Merkel spoke by telephone Friday and agreed the presence of Russian soldiers in Ukraine, the buildup of Russian troops along the Ukrainian border and Russian shelling into Ukraine represent dangerous escalations of tensions by Moscow.

The White House said the two leaders agreed that the convoy was yet another provocation by Moscow that violates Ukraine's sovereignty.

Obama and Merkel spoke Friday while Obama vacationed in the island resort of Martha's Vineyard.

Rhodes said Russia would face additional costs if the convoy is not removed. He said the U.S. would discuss the matter Friday with its partners on the U.N. Security Council.

In that closed-door emergency meeting at the U.N., several countries rebuked Russia for "what many called an illegal and unilateral action by the Russian federation," British Ambassador Mark Lyall Grant, the council president, told reporters.

"It is an undeniable and blatant violation of Ukrainian sovereignty," Lyall Grant said. "It has nothing to do with humanitarianism. That humanitarian effort is being coordinated by the U.N. and if the Russia federation wanted to participate in that, it could have done so in a collective way rather than acting unilaterally."

Lyall Grant said "there was no unanimity of views" during the emergency consultations, which were held at the request of Lithuania.

Russian Ambassador Vitaly Churkin said he defended his country during the discussions, reminding his colleagues that Moscow had received an "official note" from Kiev welcoming the idea of the Russian convoy. He reiterated Russia's stance that Ukrainian border guards were deliberately stalling the convoy. He accused Ukraine forces in recent days of deliberately shelling the areas where the convoy was supposed to head in order to claim the areas were too unsafe for the convoy.

Earlier, Ban warned that "any unilateral action has the potential of exacerbating an already dangerous situation in eastern Ukraine."

At the Pentagon, press secretary Navy Rear Adm. John Kirby told reporters that Russia must remove its vehicles and its personnel from the territory of Ukraine immediately or face "additional costs and isolation."

Kirby said the U.S. is not sure of the contents of the Russian trucks. Reports from Ukraine said trucks carrying food, water, generators and sleeping bags crossed into rebel-held regions of Ukraine on Friday morning without the permission of the government in Kiev.

Anders Fogh Rasmussen called Russia's unilateral decision to send more than 130 trucks filled with what it called humanitarian aid into rebel-held areas "a blatant breach of Russia's international commitments" and "a further violation of Ukraine's sovereignty by Russia."