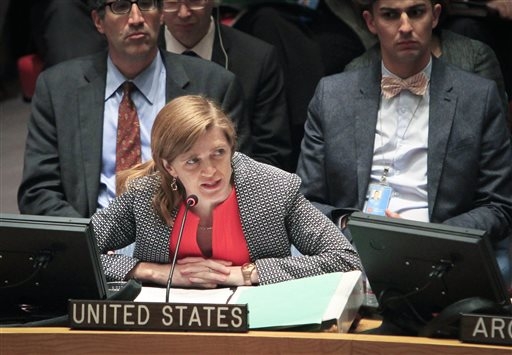 UNITED NATIONS (AP) — Russia introduced a U.N. Security Council resolution Thursday that strongly urges an immediate end to all violence in Ukraine and the launching of a national dialogue involving all political forces and regions.

The draft resolution, circulated to council members and obtained by The Associated Press, calls on all parties to immediately implement a "road map" to peace put forward by the Organization for Security and Cooperation in Europe on May 12.

Western diplomats have insisted that any U.N. resolution reaffirm Ukraine's sovereignty and territorial integrity, a critical issue following Russia's invasion and annexation of Ukraine's Crimean Peninsula which the United States and the European Union refuse to recognize.

Like the June 2 draft, the newly proposed Russian resolution does not mention Ukraine's sovereignty or territorial integrity, which makes its approval by the Security Council highly unlikely.

Churkin said there was only a brief discussion of the text, with support from some council members and suggestions from others. He said council experts would meet Friday to go over the text "to try to accomplish this very quickly."

Lithuania's U.N. Ambassador Raimonda Murmokaite called the resolution "another surprise ... like a rabbit out of the box."

Any resolution on Ukraine has to "insist on territorial integrity, sovereignty and inviolability of Ukraine's borders and we have to clearly name insurgents and militant separatists and what they're doing," she said.

Lithuania and some others will also express concern "that there's military movement across Russia's border including recent information on three tanks which have crossed into (Ukraine's) territory," Murmokaite said. "For Russia not to be able to take care of its own borders and not to prevent the flow of arms, insurgents and military capabilities is a highly troubling situation."

The draft expresses deep concern at the intensification of hostilities and killing of civilians in eastern Ukraine, where government forces have battled pro-Russian rebels for two months. Churkin noted reports of the use of white phosphorous munitions, which are banned, by the Ukrainian side.