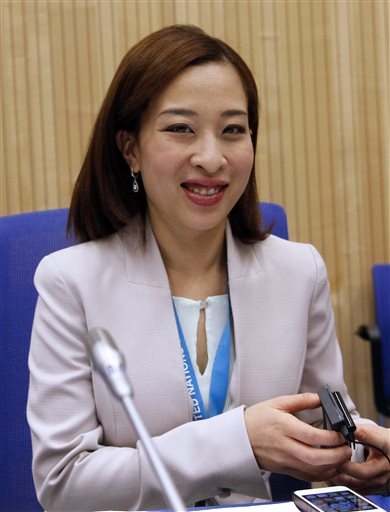 UNITED NATIONS (AP) — A Thai princess who became a criminal prosecutor and launched a campaign to help incarcerated women is now embarking on a global campaign to promote the rule of law and make "equal justice" a U.N. goal.

At the age of 34, Princess Bajrakitiyabha Mahidol is Thailand's ambassador to Austria and to the U.N. agencies in Vienna, including the Office on Drugs and Crime.

The eldest grandchild of King Bhumibol Adulyadej and the eldest child of Crown Prince Vajiralongkorn, she is also the driving force behind "The Bangkok Dialogue on the Rule of Law," an international conference in the Thai capital on Nov. 15.

The day-long conference will bring together several current and former world leaders — including Liberian President Ellen Johnson Sirleaf and East Timor's former president Jose Ramos Horta — as well as global experts to discuss how justice and the rule of law are crucial to reducing poverty and promoting peace and economic development.

"Society cannot grow if there is instability and injustice," Princess Bajrakitiyabha said in an interview on Monday.

"Without the rule of law, without a good justice system it's always chaos," she said. "I think the rule of law is a very important pillar to development, to economic growth, and of course to human rights."

The princess, who is a staunch advocate of the rule of law, comes from a country whose lese majeste law protects the Thai monarchy from defamation. It is the world's harshest and mandates a jail term of three to 15 years for violators.

Thailand itself has faced long-running political turmoil that began with a 2006 military coup. It has left the country largely divided between supporters and opponents of former Prime Minister Thaksin Shinawatra, who was ousted in the coup.

Thailand's Institute of Justice said the government is also hosting the conference to show its support for national reconciliation efforts, and "to help the people of Thailand understand how the rule of law helps to create a cohesive society and promote sustainable economic growth."

The princess said one goal of the conference is to broaden the next set of U.N. development goals to include the rule of law.

The Millennium Development Goals, adopted by world leaders in 2000, set target focused mainly on social development to be met by 2015 including reducing extreme poverty by half, ensuring a primary school education for every child, increasing access to clean water and sanitation and halting and reversing the HIV/AIDS pandemic.

Princess Bajrakitiyabha said if she could write a rule of law goal for the next U.N. goals, from 2016 to 2030, "I would say the equal justice — effective, efficient and transparent justice systems for all."

After attending law school in Thailand and getting her doctorate in law at Cornell University in Ithaca, N.Y., Princess Bajrakitiyabha spent a year at Thailand's U.N. Mission in New York focusing on the General Assembly's legal committee. She then returned to Thailand where she said she spent six years as a prosecutor, mainly focusing on criminal law.

An advocate for women's rights, she said she started a charity project called "Inspire" to help women "suffering hardship in prison, especially those pregnant and having babies ... (who) touched me deep to my heart."

The princess also spearheaded Thailand's campaign for international rules on the treatment of women prisoners, which were adopted by the General Assembly in 2010. Thailand's U.N. Mission is organizing a panel Wednesday to promote those rules, known as the Bangkok Rules.