US accuses Iran of nuke 'deception and delay' 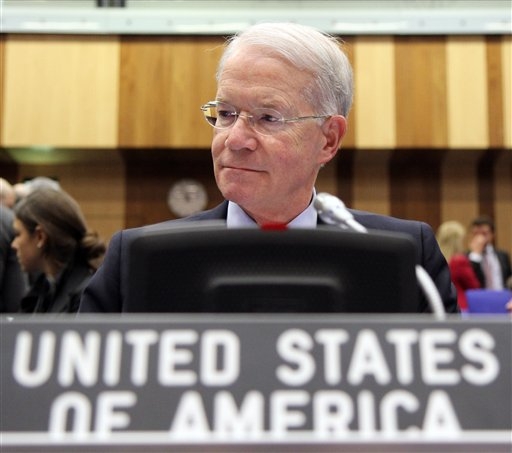 Joseph Macmanus, the chief U.S. delegate to the International Atomic Energy Agency, also suggested that the U.S. might push for tougher diplomatic action in the coming months.

While not going into details, his comments indicated that America might lobby the IAEA board to ask for a special inspection of Parchin, a facility that the agency suspects was used to test explosive triggers for a nuclear weapon, or that the United States would seek an IAEA resolution critical of Tehran.

International criticism of Iran has been relatively muted since last week's nuclear talks in which Tehran showed interest in proposals made by the United States and five other world powers. While expressing concern about enrichment and the deadlocked probe, the six powers avoided tough language and mentioned the "useful meetings" that produced the proposals in a joint statement Tuesday to the 35-nation International Atomic Energy Agency board.

By contrast, the comments Wednesday to the same meeting by Macmanus were unusually hard edged, suggesting they were meant to signal that pressure on Iran over its nuclear activities would not diminish.

Without having to pay heed to Russia and China — countries in the six-power group that are traditionally softer on Iran than Washington — Macmanus concentrated on expressing the U.S. view of Iran's alleged failure to meet its international obligations and diminish concerns that it wants nuclear weapons.

Iran denies any such aspirations. But it hid its enrichment program for years and is rapidly expanding it, prompting suspicions that it was less interested in using it to make reactor fuel and more in its other use — producing fissile warhead material.

The IAEA also suspects that Tehran worked secretly on nuclear weapons, basing its assessment mostly on intelligence from the U.S., Israel and West European nations. Tehran says the intelligence is faked and refuses to allow the IAEA to resume a probe of the allegations until details of how that should proceed are worked out — a stipulation the West dismisses as a delaying tactic.

Repeating that his country had no interest in nuclear weapons, Iran's chief delegate, Ali Asghar Soltanieh, told reporters that IAEA chief Yukiya Amano was to blame for Iran-related tensions at the agency by issuing reports that "provoke" member states. As for lack of progress in reopening the agency's probe, "the source of the problem is not Iran" but the IAEA, he told reporters.

The board approved Amano by acclamation for a second four-year term on Wednesday. Asked about his views on Amano's handling of Iran's nuclear file, Soltanieh, whose country is not a board member, criticized his "political approach," adding: "there have been some ups and downs."

Macmanus, in comments to the closed meeting made available to media, focused on both Iran's expanding enrichment program and refusal to allow IAEA experts access to sites, officials and documents it wants to probe in its investigations of Parchin and other suspicions of nuclear weapons work.

"We are deeply concerned with what appears to be Iran's unwavering commitment to deception defiance and delay," he said. "Iran ... has chosen to take further provocative actions."

Asked about possible requests for a special inspection or an IAEA board resolution in the future, he later told reporters that "some adjustment might have to be made" in ways to address concerns about Iran, adding that will be taken up by the board "over the next several months."

Iran can refuse a special inspection but that would set it up for referral to the U.N. Security Council. Like others before it, a resolution critical of Iran also would go automatically to the council, adding diplomatic pressure on Tehran.

Diplomats say the proposal made to Iran late last month by the United States, Russia, China, Britain, France and Germany, would obligate Iran to decommission its centrifuge plant at Fordo now making higher-enriched uranium and ship out the approximately 165 kilograms (about 365 pounds) it now has as well as allowing increased U.N. oversight.

With no such material stored and none being made, Iran's most direct path to quick manufacture of weapons-grade uranium would be eliminated — about 250 kilograms of higher-enriched uranium are needed to be able to have enough material for one nuclear bomb with further enrichment.

In return, the six are offering to help supply and run Iran's research reactor, which is fueled by plates made from higher enriched uranium, coupled with what Iran wants most — relief from sanctions meant to penalize Iran for refusing to heed U.N. Security Council demands to stop all enrichment.